Sisters in Spirit Walk and Vigil and Red Dress Campaign 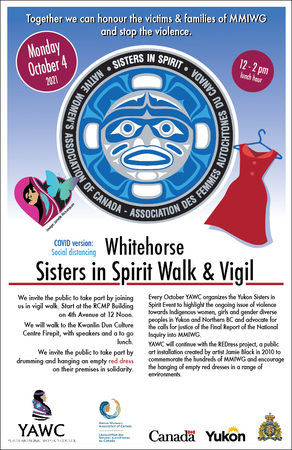 YAWC invites the public to join us at noon to gather outside the Whitehorse RCMP detachment building to start the opening ceremony and walk. We will continue on Main St. to the healing totem, along the Millenium Trail and ending at the Kwanlin Dün Cultural Centre firepit for a closing ceremony and lunch to-go. Elders are invited to gather inside the KDCC.

We also ask the public to drum and hang a red dress on their premises in solidarity. We appreciate your support.

Every October, YAWC organizes the Yukon Sisters in Spirit Walk and Vigil. The purpose is to collectively honour the victims and families of Missing and Murdered Indigenous Women and Girls (MMIWG) in Yukon and Northern British Columbia and advance the calls for justice of the National Inquiry into MMIWG.

On Oct. 4th, we encourage every government, business, and individual in Yukon and Northern British Columbia to participate: Join community walks and vigils and hang a red dress on your premises in solidarity and at noon drum 42 beats for each Indigenous woman gone.

YAWC will also display 42 empty red dresses in trees along 2nd Ave and Robert Service in Whitehorse. Forty-one dresses represent those Indigenous women in Yukon and northern BC who have been murdered or have disappeared. One dress symbolizes the next vulnerable target.

The rates of violence against Indigenous women, girls, and gender diverse peoples are much higher than for non-indigenous women in Canada. Perpetrators of violence include family members, partners, casual acquaintances, and serial killers.

Every October, YAWC organizes the Yukon Sisters in Spirit event. The purpose is to raise the issue of MMIWG in Yukon and northern BC, honour the victims and their families, and advance the calls for justice from the National Inquiry into MMIWG.

In 2010 in partnership with the Native Women’s Association of Canada and Yukon Government, the Yukon Sisters In Spirit Project was initiated and worked collaboratively with family and community members and the RCMP to document the MMIWG in Yukon. Over three years, 33 new undocumented MMIWG were identified, in addition to the 5 known cases, bringing the total to 38. In 2020, the number has risen to 41 MMIWG. YAWC works closely with Canada, Yukon Government, and the RCMP to provide ongoing support to research on MMIWG cases, advocacy outreach prevention, and land-based healing for survivors of violence and MMIWG family members.

“The continuing murders, disappearances and violence prove that this crisis has escalated to a national emergency that calls for timely and effective responses.” - Chief Commissioner Buller, 2019

In June 2019, the National Inquiry into MMIWG Final Report was released. It documented over 460 testimonies made by survivors of violence and family members of women and girls who have been murdered or disappeared, including Yukon. The report concluded that violence committed against these individuals is at a scale of race-based genocide in Canada. Their human and Indigenous rights were abused, violated, and allowed to continue, and their safety, security, and dignity were denied. Chief Commissioner Buller said that the violence against Indigenous women, girls, and gender-diverse people in Canada is a national tragedy. Regardless of which number of MMIWG is cited – the number is too great.

The REDress is a public art installation created by artist Jamie Black in 2010 to honour the hundreds of MMIWG. It is an ongoing project to commemorate MMIWG by hanging empty red dresses in a range of environments.