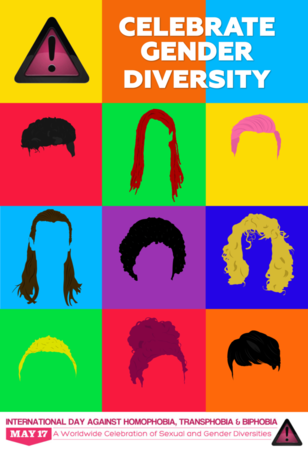 May 17 is now celebrated in more than 130 countries, including 37 where same-sex acts are illegal. Thousands of initiatives, big and small, are reported throughout the planet.

The International Day against Homophobia, Transphobia and Biphobia has received official recognition from several States, international institutions such as the European Parliament, and by countless local authorities. Most United Nations agencies also mark the Day with specific events.

Even if every year a “global focus issue” is promoted, the International Day Against Homophobia, Transphobia and Biphobia is not one centralised campaign; rather it is a moment that everyone can take advantage of to take action, on whatever issue and in whatever format that they wish.
Many different entities participate in the global mobilisation around May 17 and as a consequence it receives many different denominations. Some organisations add Lesbophobia or Intersexphobia as distinct focuses. Acronyms also vary, from the initial IDAHO to IDAHOTB or IDAHOBIT. The Day is not one central trademarked brand and everyone is free to communicate as they wish.Nevertheless, we have seen lately that several groups translate the “I” with “intersexism”. We have consulted with Intersex organisations who consider this term to be vague and misleading. We therefore ask everyone to please refrain from using the term “intersexism” and prefer the term “intersexphobia”. Please also note that the name of the Day currently does not explicitly include Intersexphobia as there is no global consensus among the Intersex communities that this should be included in the remit of May 17.

Queer Yukon Society supports, promotes, and organizes events for the LGBTQ2S+ community and our allies in Whitehorse, Yukon. Officially incorporated in 2018, Queer Yukon has been organizing Yukon Pride since 2013, as well as many other events to bring together LGBTQ2S+ and allied Yukoners to build a strong and vibrant community.