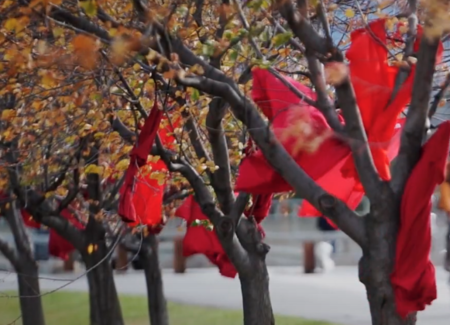 In North America, the scores of missing and murdered Indigenous women—known as MMIW, an acronym created by Indigenous journalist Sheila North Wilson in 2012—don’t get the mainstream attention they deserve. Sheila North Wilson, grand chief of Manitoba Keewatinowi Okimakanak (MKO), says the hashtag #MMIW was a way to put discuss the issue on a larger platform.

The REDress Project has since evolved into a national movement. The color red has become a symbol for MMIW across North America in general, extending well beyond just artist Jamie Black’s work. To read the full article from VOGUE click and the movement in North America, click here.

In Canada, May 5 is now Red Dress Day, when people of all backgrounds are encouraged to wear red to raise awareness. Indigenous activists also frequently wear red at MMIW gatherings, where red handprints are often painted onto their faces too. During the month of October in Yukon, 2020 a Yukon Sisters in Spirit Vigil & Red Dress Campaign was held and 41 dresses and drum beats represented those Indigenous women in Yukon and northern BC who have been murdered or missing and one dress and drum beat symbolized the next vulnerable target. A video honouring that day can been seen here.

In Canada, the government’s National Inquiry found similar horrifying statistics, including that Indigenous women are seven times more likely to be murdered by serial killers than non-Indigenous women. In the U.S., homicide is the third-leading cause of death among Native women ages 10 to 24, according to the Urban Indian Health Institute, and Native women are victims of murder more than 10 times the national average, according to the U.S. Department of Justice.

For read more about the strategy from Yukon Government 'Changing the Story to Upholding Dignity and Justice: Yukon’s Missing and Murdered Indigenous Women, Girls and Two-spirit+ People Strategy', click here.

If you are a victim of violence, a family member of a MMIWG, or someone concerned about violence in your community, please contact Joy about the MMIWG Outreach Program and other services, including FILU, legal, clinical and traditional counselling, and cultural and elder supports.